The Florida Manatee, aka Sea Cow is no longer endangered, but is still a threatened species. The efforts of many volunteers, biologists & the protection from the Endangered Species Act has slowed down the extinction level of this large mammal. Florida is known for its beaches, fun in the sun, & being out on the water. We certainly don’t want to change that, but want to bring awareness of what lurks under Florida waters.

One of the largest threats to the Manatee is water traffic. They are often hit or grazed by boats & jet skies leaving scars on their skin. Sometimes killing them. They are tough & gentle at the same time. Like land cows, they are grazers & play an important role in plant growth in springs, rivers & coastal waterways. Since the Manatee is a mammal, it migrates to the warmest water they can find during all times of the year. They tend to favor the shallow rivers & springs during the coldest months of the year. Adopt one of these to help protect this beautiful sea creature and make the planet a better place. Learn more about what you can do to help here.

One of the best places to see a Florida Manatee is at Blue Spring State Park during the months of January & February. Hope you get a chance to visit. 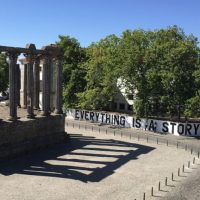 Start and head to the finish line

Book Blogger, Author, and I talk about dogs...a lot

Getting lost is not a waste of time

Scuba Diving Around The World

We are all just babes in the woods.

Welcome to a blog about our outdoor experiences.

Nature, history, & culture in Bend & beyond

You don't choose your family. They are God's gift to you, as you are to them. ~Desmond Tutu

Two on a Rant

Rants, humor, sarcasm, and a haiku-like substance? It's hard to know what's going to come out of our minds next.