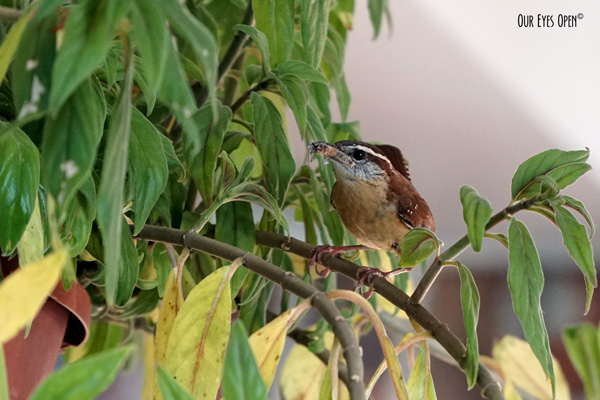 Welcome to Week #30 of the Bird Weekly Photo Challenge. Week #30 challenge is Birds starting with a “C”. As long as one of the words in the title starts with a “C” it is good to go. Like Double-crested Cormorant which could also work for the “D” challenge in a few weeks.

The feature image is a Carolina Wren. There was a nest in this hanging basket. The female laid 4 eggs. Three hatched and all three chicks thrived and fledged. We watched the male and female catch insects and gorge on mealworms provided by us to raise those babies that fledged about 3 weeks after they hatched. This was in April, 2020 when I had just lost my job due to the pandemic and brought brightness to my days and life.

Before we plan our birding trips, we scour the many lists on Ebird.org to see what has been seen and logged in recent days. If you don’t use Ebird and want to get out there and find them, I suggest using this site or download the app to your phone. The data you submit goes directly to CornellLab of Ornithology. Birds are logged by birders and scientist all over the world.

Steps to a Great Day of Birding

Two and half hour (one way) Trip

This week, Frank & I have had a big week. We took two birding day trips. Monday, we went to Merritt Island Wildlife Refuge. In a 9 hour day, we saw 65 species of birds. On every trip, we have at least one target bird of the day, but on this day, we had three. The Sora, Cinnamon Teal and Florida Scrub-Jay. We saw all our target birds and then some. At the end of the day, January 4th, we had logged 85 species since the beginning of 2021.

Then on Wednesday, we got up at dark-thirty and drove to St. Marks Wildlife Refuge with the American Flamingo and Canvasback as our target birds. Unlikely that we would see the flamingo as there was a lot of water in the wetlands. We were right. We hiked miles looking for that bird, but came up empty. We did, however, see over 10,000 waterfowl in one pond. It was like nothing we have ever seen before. We did get the Canvasback. At the end of an 9 hour day, I logged birds on the trip home and we saw 73 species. We have 109 species for the year and it is only January 8th.

The true magic of this week was that I got two target birds starting with a “C” for this weeks challenge. That never happens. 2021 is starting off pretty darn good. The bird photos above are just a small section I could get at one time. I didn’t bring my other lens to get the whole pond. There must have been over 1000 Redheads.

Northern Cardinals are probably the easiest bird to identify. They are popular as live birds, but they adorn many items and are a true symbol of the holidays. I have several cardinal ornaments decorating my Christmas Tree. The quilt on my bed is embroidered with Cardinals. This photo was taken in our backyard on the fountain that Frank built out of stone and driftwood that he collected in Washington State and granite that was left over from our kitchen remodel. He repurposes many things to create new things.

“Grabbing a bite to eat for my photoshoot, but Mr. Red-bellied had to get himself in there. I guess I can share the spotlight”.

The Common Gallinule is also known as the Common Moorhen. These birds swim like a duck but have the feet like a chicken that allows them to walk like rails on top of floating vegetation seen here. They are easily spotted with the red shield over their bill and the white stripe going down their side.

These Cormorants were preparing to roost for the night as we were leaving St. Marks on Wednesday evening. So many of them were flying in and knocking others off branches. “How Rude!” Like the Anhinga from the last challenge, the Cormorants have to perch in the sun, wings spread out to dry because they have less preen oil than other birds which makes their wings not waterproof.

The Cattle Egret is a true World Traveller. They can be found in agricultural areas near wetlands. They are often in open fields and you might get a photo op of one perched up on top of a cow or horse. They follow behind farm equipment and large animals that stir up invertebrates and will head towards smoke to catch fleeing insects as they evacuate the fire.

This Yellow-crowned Night Heron is a juvenile that we spotted at Lettuce Lake Park in Tampa, Florida last January. This is the perfect habitat for them as they eat crabs and crayfish. They catch their food with a lunge and will shake it apart or swallow it whole.

Rare Bird Alert! The last time we saw a Cinnamon Teal was when we went to Henderson Birding Preserve outside of Las Vegas, NV. This duck breeds in the Western part of the United States and rarely is seen east of Texas. This guy migrated in with the Blue-winged Teals and was spotted at Merritt Island Wildlife Refuge near the second blind of #3 on Monday. A separate breeding population of Cinnamon Teals can be found in South America.

Imagine trying to spot one Canvasback in the midst of 1000 Redheads surrounding him and separate him from the hundreds of American Wigeons and Blue-winged Teals. That is the scenario that played out on Wednesday at St. Marks Wildlife Refuge. This was our target bird for the day and he was spotted amongst the Redheads (seen behind the Canvasback). Easiest way to distinguish these two red headed ducks is the Canvasback has a longer bill and the white plumage on his back. To see them together during migration makes sense. The female Canvasback sometimes lays eggs in another Canvasback nest and Redheads and Ruddy Ducks sometimes lay their eggs in a Canvasback nest.

The Canvasback species name is valisineria meaning wild celery. The winter buds and stems are their preferred food during non-breeding periods.

Often seen by the thousands during migration, the American Coot is similar to the Common Gallinule as it swims and floats like a duck but has those long toes like a chicken to climb around on marshy vegetation. They are a close relative to the Sandhill Crane if you can believe that. On Monday, we saw over 4000 on an 11 mile stretch of the Black Point Drive at Merritt Island Wildlife Preserve.

The Canada Goose is one of the birds that has done a fine job of expanding its territory. I mentioned a few weeks ago how they have become invasive in many areas. I guess they found that retirement in Florida was a really great idea!

This Common Merganser with 5 other females swam alongside our Inflatable kayak that we loaded on a plane for our trip to Yellowstone and Grand Tetons. We were paddling String Lake in Grand Teton National Park when they flew in and landed near our boat. Couldn’t believe I was bobbing in the water and got this shot clearly. This is a bird that we don’t see in the southeastern part of the United States.

The Common Raven is found mainly on the west coast of the US, Mexico and Canada. It would not be unusual for it to be seen in some of the northern states from North Carolina. We had to go to Vegas to get our first sighting. This guy was perched up in a tree at the Desert National Wildlife Refuge just north of the Las Vegas strip.

Sandhill Cranes seen near Viera Wetlands. Viera, Florida is just south of Cape Canaveral and one of several favorite birding spots in that area.

Next time…Week #31 – Butts in the air. Please try to identify what the bird is that has its butt feather smiling at you.