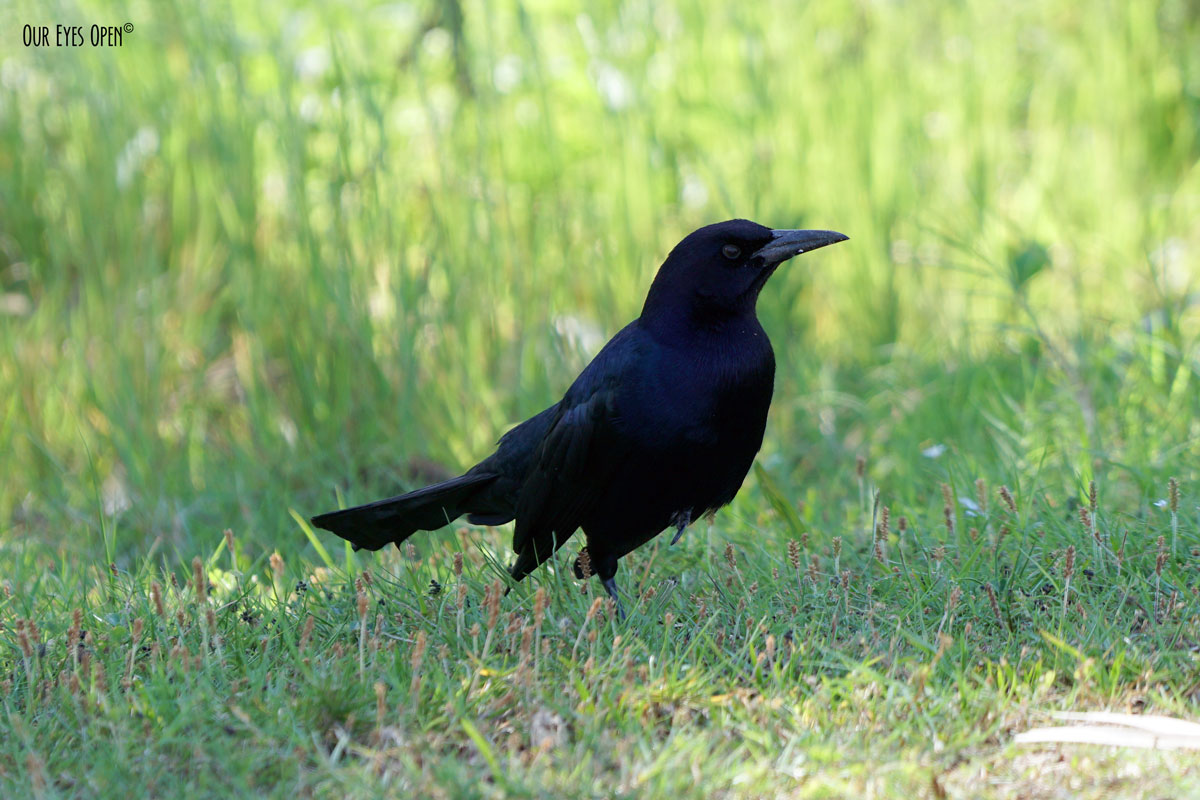 Welcome to Week #21 of the Bird Weekly Photo Challenge. Week #21 challenge focuses on Birds with Black Feathers just in time for Halloween.

I understand Halloween is celebrated with vigor in America and not so much in other countries. With that said, Halloween signifies the creepy and scary. Black cats, black birds…black everything! I figured this would be a good time to check out some black feathered birds. Those that demonstrate a true Halloween sense & those who just have some black feathered features.

The feature image is a Boat-tailed Grackle and I have added him to the bottom with a bit of some insight.

American Crows can be found in the U.S. & Canada primarily. They will fly to Bermuda and along the border of Mexico. The wall isn’t keeping these intelligent problem solving birds out! American Crows are very vocal with their “Caw” sound and since they tend to gather in groups, it can be quite loud. They will eat just about anything and have been known to hang out at city parks and garbage dumps. The one above was in one of our parks in Jacksonville. Frank & I had just finished a pizza that we ordered from across the street. Too bad…none left!

Stars of the Alfred Hitchcock’s “The Birds”.

American Crows are social birds and will congregate in large numbers during the winter and share communal roosts which can be a few or or a couple of million. They may have been frightening people in Hollywood in 1963, but you can bet a mockingbird isn’t scared of this pest. You will often see Mockingbirds chasing them away and dive bombing them as they fly off, sending a clear message to stay away.

The male is the most distinguishable of the family. Those black feathers in the front blend into that coppery red tone of the head making this duck stand out like a sore thumb. The female has a tiny bit of black in her tail feather. Otherwise she is brown & gray with a much lighter reddish head. During mating, the male Redhead will throw his head back against his back until his head touches his tail. He will then snap his neck forward while giving a loud call that sounds like a mee-ow. Talk about being limber!

The Cactus Wren is a larger wren measuring 7-8.7 inches (18-22 cm) and is found in the desert areas of the United States, Texas westward and in Mexico. Their name is fitting for their habitat of thorny shrubs, cholla and prickly pear. They are not like typical wrens. They don’t cock their tails over their back the way other wrens do. They fan their tail feathers instead. They are quite loud and are always up to something. This one was playing hide-n-seek with me at the Lake Mead Visitors Center in Boulder City, Nevada.

Black Skimmers are like a watchdog on the scent of a missing victim. They use their sensitive bill to find and catch fish. Because they feed by touch, they can forage both day and night. They are most often seen along the coastlines of North and South America and in the Caribbean.

The Eastern Towhee is in the sparrow family but is larger than a sparrow….more the size of an American Robin. The male above has bold colors of black, coppery orange and white. The females have the same patterns as the male, but where the males have black feathers, the females are brown. They have a distinguished red eye, but there is a subspecies in southern Georgia & Florida that has a pale yellow eye. The male above was seen at St. Marks Wildlife Refuge near Tallahassee, Florida and had a yellow eye!

The Western Grebe is another red-eyed bird found in the mid to western part of the United States, Canada and Mexico. The males generally have a longer and thicker bill than the females, possibly to lessen the competition between the prey each could eat. Until 1985, Western and Clark’s Grebes were considered the same species. Scientists learned that the two birds rarely interbred even though they lived in the same area. Their DNA was substantially different. Now they each have their own identity.

Our third red-eyed bird is the Plainopepla. Their name comes from the Greek for “shining robe” which is fitting for the shiny, jet black plumage of the adult male like in the photo above. They can only be found in the western United States & Mexico. They live in the desert and can often be seen perched high in a Mesquite tree eating the mistletoe. The Plainopepla is the only bird in the Ptilogonatidae family found in the United States. This guy was a lifer for us when we visited Floyd Lamb Park near Las Vegas, Nevada.

The Boat-tailed Grackle can be another annoyance like the American Crow. They are beggars and will try to ruin your picnic. I look at this as a photo op. Get too close to me and I have no problem putting my sandwich down for a moment to take your picture. The opportunist becomes the subject of another’s opportunistic ways. Besides, my food is well guarded by Frank who takes the attitude of “Too bad, so sad”.

Boat-tailed Grackles mate like big game animals such as deer. The fittest male wins the prize of the female. Females cluster their nests in a small area safe from predators while the males compete to see which one gets to defend and mate the entire colony. Scientists have found through DNA testing that only about 1/4 of the young belong to the dominant male. The rest are fathered by other males who mate with the females away from the colony.