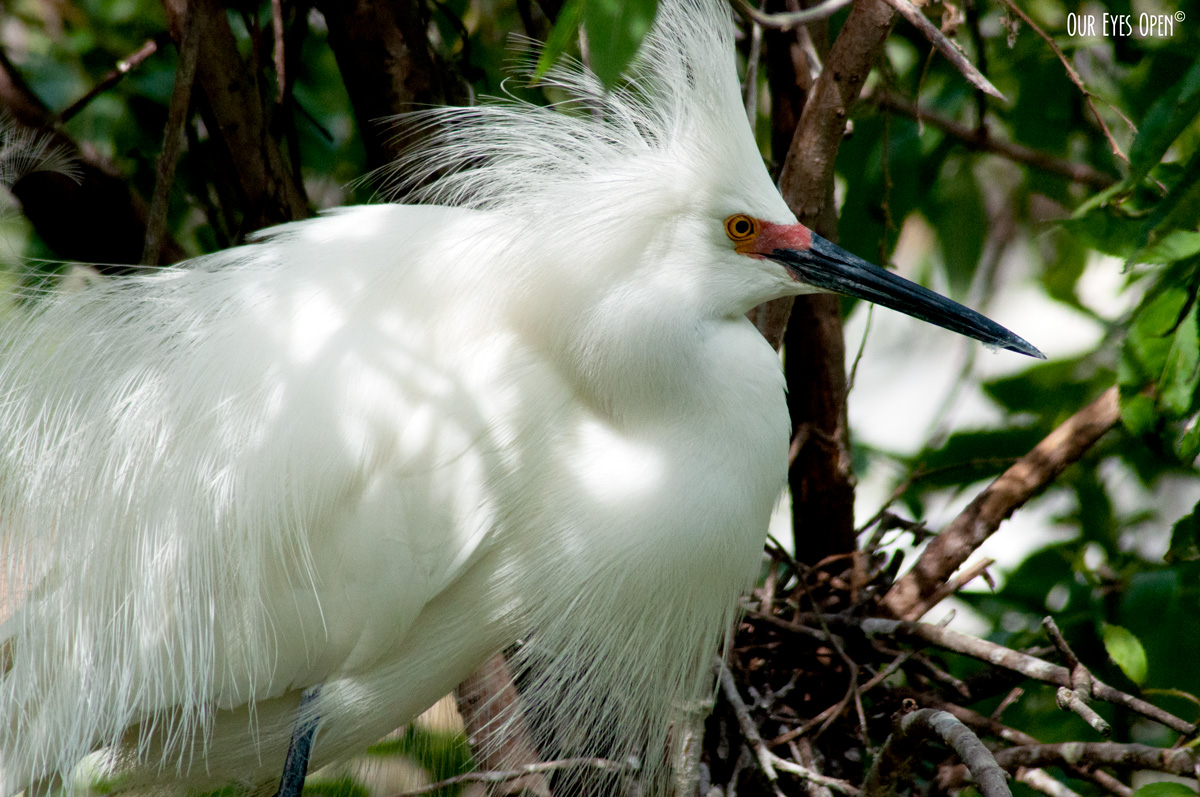 Welcome to Week #38 of the Bird Weekly Photo Challenge. Week #38 challenge is birds that begin with the letter “E” in their name such as the European Starling or Great Egret.

Change in the weekly menu

NOTE: I’ve done a little rearranging of the themes for the next couple of weeks. I changed the monochrome (black & white | sepia) challenge to Week #40 to go in line with Cee’s Anything in Flight Black and White Challenge. See my Bird Weekly page for the changes. I am also taking the week of March 28th off, so no Bird Weekly on April 2nd. Frank and I will be celebrating our 4th wedding anniversary that week and will likely be out birding since we are not getting on an airplane anytime soon.

The feature image is a Snowy Egret in breeding colors. You can tell by the pink color near the eye called the lore. The lore is the region between the eye and the bill on the side of a bird’s head. This one was nesting at the Alligator Farm in St. Augustine, Florida.

Living on the east coast of the United States, gives me opportunity to share some “Eastern” varieties of birds. Lots of Egrets and other “E” birds for this week. I thought in honor of the “E” birds this week, I would mention to all my friends, bloggers and those who may be new to Bird Weekly about Ebird.org. You put the E to the Bird and what do you get? Sounds like a jingle for a commercial. Okay, going off the deep end!

Before we plan our birding trips, we scour the many lists on Ebird.org to see what has been seen and logged in recent days. If you don’t use Ebird and want to get out there and find them, I suggest using this site or download the app to your phone. The data you submit goes directly to CornellLab of Ornithology. Birds are logged by birders and scientist all over the world. It’s free and easy to set up an account.

I met an up and coming birder on our birding trip to the Viera Wetlands last Thursday. We were on the driving trail and pulled up next to her and she was looking for a Painted Bunting in some bushes. I wasn’t too optimistic and after some conversation, we moved on. A bit down the road, I got out of the car and started taking some photos. The woman pulled up and started talking again, asking all kinds of questions. She had captured a bird on her camera and needed help identifying. I was able to do to that quickly. She had just seen and photographed her first Eastern Phoebe. I thought to myself, “E” birds are coming up, but I have one in my yard so no need to backtrack. I did, however, tell her about Ebird.org and the blog. I hope she finds as much joy in her new found passion as we all have.

The Great Egret is a large white heron that breeds in colonies near lakes, rivers, swamps and oceans. They eat mostly fish, frogs and small mammals. In 1953, the Great Egret became the symbol of the national Audubon Society. Audubon was founded to protect the Great Egrets that was being driven to extinction from hunters killing them for their feathers to adorn the wealthy ladies’ hats.

Not all the eggs that hatch in a nest survive. Siblicide as it is known, is when the larger chick or chicks kill their smaller siblings. This type of aggressive behavior is common. Only the strong survive! There was only one chick in this nest getting fed. This pair was seen at the Alligator Farm in St. Augustine, Florida.

The Snowy Egret was another victim of the fashion industry when conservationist began their efforts to protect this species as well. The Snowy Egret is quite elegant and smaller than the Great Egret. It is very similar to the Little Egret from Europe. They are so similar that it takes an expert ornithologist to know the difference unless you are in the territory of where one would normally live. They are distinguishable only by the Little Egret’s dark gray eye lores, more black on the legs year-round and the head has two long head plums to only one with the Snowy Egret.

The diet of a Cattle Egret is a little different than other egrets. It eats mostly large insects like grasshoppers, crickets and flies. Frogs, spiders and moths are also on the menu. Occasionally, they will eat crayfish, earthworm, snakes, nestling birds, eggs and fish. They follow large, grazing animals to pick the ticks off their backs. Guess they could be referred to as a Cattle Vacuum.

The Reddish Egret is the entertainer of all the egrets. They dance around acting like they are not going to eat you and bam! They are quite spastic with their movements while they open their wings, shadowing the water while in pursuit of small fish. There are two morphs to the Reddish Egret. A rare all white morph and the more common darker bluish and reddish morph as seen above. At adulthood, they have a pink bill with a black tip. Their behavior will stick out among other egrets and herons.

This Eastern Towhee was singing loud and proud. We heard him and followed his song.

I wanted to share the sound I was hearing when we went in search of this Towhee. I found this clip on YouTube and decided to share it today.

There were over 40 Eastern Meadowlarks that flew in right where we were in this conservation area. They provided quite a show for a good 15 minutes before they got spooked by something, not us and flew off.

This Eastern Phoebe showed up last summer and was a sweet surprise to our quarantine situation. It was the first Eastern Phoebe to visit our yard and so far, as of today, it is still in the neighborhood. I saw him on the feeder branches yesterday. They don’t eat seed, rather they eat insects, especially flying insects. They are in the flycatcher family and can be easily mistaken by beginning birders for other birds with Flycatcher in their name. It had been raining and this phoebe came out right after a summer shower.

The Eastern Bluebirds don’t usually come to feeders, however our bluebirds spent a great deal of time perched on the feeder branches last year. You will increase your chances in luring them to the feeder with mealworms as they are meat eaters. We didn’t put mealworms out, but we have plenty of worms and grubs in our yard that kept them happy. It was a real treat to have them for several months. They have moved on, but hopefully they will be back in a couple of months.

Bald Eagles are opportunists. They will hunt for fish and small mammals, but they are more likely to steal already captured fish from an Osprey or smaller Hawk than to go fishing the hard way. They are the National bird of the United States and can be considered the most beautiful pirates in the sky, stealing from those more vulnerable than themselves. Politics!!!!

Next time…Week #39 – Birds that eat fish as their primary diet.