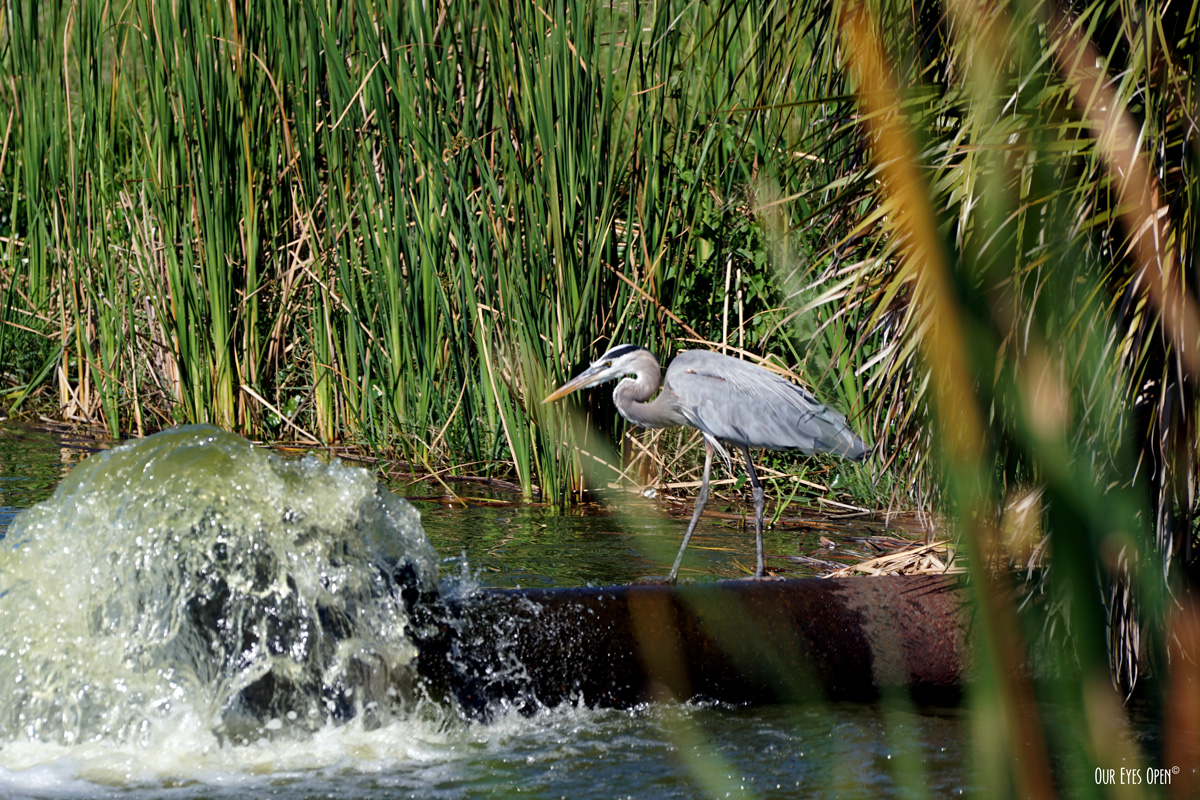 The feature image is a Great Blue Heron patiently waiting for a fish to pop up out of the water pipe at Viera Wetlands in Viera, Florida.

This post is in response to TERRI WEBSTER SCHRANDT Sunday Stills challenge. The theme this week is Water.

With Florida being a peninsula and water on three sides of it, the St. Johns River that runs north (uphill) and the Hillsborough River running through Tampa Bay, plus Lake Okeechobee, numerous lakes and springs, Florida is the place for water! While I have waterfalls and other awesome water photos from other states, I will stick with my home state for this post.

Fishermen motoring off into the sunset through the salt marsh.

The Atlantic Ocean can be quite powerful during a storm. The Pelicans like to ride the waves along the 6 miles of sandy beach at Little Talbot Island State Park. The handicap accessible boardwalk on the right is no longer there and the dunes are gone. It was destroyed by Hurricane Matthew in 2016.

Whether you are on the west coast or east coast of Florida, there is always a fantastic sunset to be seen. Both of these shots were taken in Jacksonville on the east coast. The one on the right was me wading out into the surf to capture the sun’s reflection in the shallow water left when the tide was going out. The photo on the right is the St. Johns River looking west as if you were on the west coast of Florida. The St. Johns River is the longest river in Florida. It flows 310 miles north starting at its Headwaters at Blue Cypress Lake in Indian River County to the mouth where it empties out into the Atlantic Ocean east of Jacksonville.

A beautiful sunset adorned with rays behind building storm clouds. A lone bird is flying away from me.

A family of Manatees swim by at Blue Springs State Park.

This is the tallest of 4 bridges that connect Tampa, St. Petersburg and Clearwater. Unfortunately, it is a killer! There have been at least 310 deaths by suicide, 43 survivors and many others missing. In 1999, the state of Florida installed six crisis hotline phones along the center span and began 24 hour patrols. By 2003, the call center at the Crisis Center of Tampa Bay had only received 18 calls from potential jumpers. In January, 2020, the Florida Department of Transportation (FDOT) announced they would be installing a Skyway Vertical Net, a barrier to prevent suicide. The $3.4 million project is expected to be complete by this summer.

A couple canoeing along the Hillsborough River at Lettuce Lake Park in Tampa, Florida.

The rapids…yes I said rapids at Hillsborough River State Park near Zephyrhills, Florida.

A peaceful day exploring Little Talbot Island State Park when there were still trees. The erosion is really causing an alarming concern as the tremulous surf continues to push this natural beach further back with no dunes to protect it. The state has mentioned restoration projects but so far nothing has happened. It would be a shame to lose this barrier island in the next 30-40 years.